Today we’re taking you on a virtual tour of the murals in nearby Hamilton, Ohio!

You all know that Cincinnati has an amazing set of murals (thanks to ArtWorks!) but did you know that Hamilton, Ohio has its own set of fabulous murals as well?

Street Spark is Hamilton’s own public art program. The mural project is a joint partnership with the Fitton Center for Creative Arts, the City of Hamilton, and the Hamilton Community Foundation.

The Street Spark program started in 2016 and, over the years, they’ve completed eleven different murals.

Five of the murals can be seen via your own self-guided walking tour through downtown Hamilton. In fact, that’s exactly what we did. We started at our favorite Hamilton craft brewery, Municipal Brew Works, where we grabbed a beer in a DORA cup and set out to see some murals!

You’ll find Make Way for McCloskey right next to Municipal Brew Works. This mural honors the work of local writer and illustrator, Robert McCloskey, pulling in scenes from some of his books. Who remembers “Make Way for Ducklings” or “Blueberries for Sal”???

We saw Taking Flight (see the second image above) which is at the corner of 2nd and High Street. It is painted on the side of a parking garage and is a wonderful addition to Rotary Park.

Incrementum (also pictured above) is probably my favorite of the murals. Located at 350 High Street, the scene is a depiction of the Greek Goddess of Spring, Hebe.

Just a few blocks off High Street you’ll find Golden Ethos, a mural on the side of North Second Bottle and Tap. Street Spark says this about the illustration: “Portraying a powerful female figure participating in an occupation that is predominately male, helps to inspire women of all ages to strive towards being their true selves, and to not be afraid of the constraints of the social or professional norms we live in today.” (source)

Hey Caddy-O pays homage to Hamilton’s automotive history. Did you know that Hamilton’s own Fisher Body produced bodies for Cadillac from 1947 through 1988?

Hop in the Car to See the Remaining Murals…

Cross over the Great Miami River to see three more of the murals: Alexander, The Delicate Balance, and Left Hander for Life.

Another personal favorite of mine = Left Hander for Life. Appropriately placed on the side of Clark’s Sporting Goods (15 South B Street), this mural honors Hamilton native Joe Nuxhall. Joe is featured here for both of his stellar careers in baseball: as a young Cincinnati Reds player and as an announcer and local public figure.

The Delicate Balance of Progress (located at 212 Main Street) features paper cranes and swallows along with fragile light bulbs. Looking at the photo, the background pattern is amazing and looks as though it’s projected onto the building rather than painted. Amazing. And this mural made great use of the building’s windows in its design, don’t you think?

Alexander Hamilton, the city’s namesake, graces the back of Armstead Park (Main and D Streets). This vibrant portrait is based on John Trumball’s 1806 portrait of Alexander. It makes perfect sense that this mural was created in Street Spark’s first year of murals!

There’s a mural on the side of the gymnasium at the Miami University Hamilton Campus (1601 University Boulevard). Paint the Town Red is a fun take on the Hamilton skyline, all done with a heavy inclusion of Miami University red. The design was kept simple and vibrant to allow easy viewing from River Road. If you want to see this mural on foot (versus as a drive by), park the car and walk towards the river – it’s on the back of the building. And if you happen to have a Frisbee and some time on your hands, you’re right in the middle of the Disc Golf Course at Miami Hamilton!

Inspiring the Future is one of Hamilton’s newer murals and can be found along the front of the Booker T. Washington Community Center (1140 S. Front Street). The community center provides a nurturing environment for youth and teens, as represented in the mural. Along the front is a beautiful garden area as well.

Head to nearby Lindenwald to see the last of the eleven murals – The Flowing Pride of Lindenwald. Located at 2537 Pleasant Ave., this mural features large graphic fonts over a the Lindenwald business district.

Will We See Any New Hamilton Murals in 2020?

Hamilton is in the process of putting a few more murals on the map in 2020. Of course, like some many other things. the dates are all subject to change in this crazy summer of the big C! But we’re hoping to see murals 12, 13, and 14 go up this year. They include:

Ro-Bros will be coming soon to the North End, 802 Heaton Street. This mural will include two larger-than-life robot brothers against a vibrant stylized sky. It was created by Logan Walden, a painter, illustrator and digital artist from Hamilton, Ohio. The design will incorporate the building’s architecture, using the windows for the robot’s eyes.

Garden Parade is planned for Jefferson Park this summer. It is a project on the fence near the East Avenue Boys & Girls Club. The mural is designed by Lizzy Duqette, a multi-media artist, illustrator and teaching artist from Cincinnati. This bold and colorful mural will show a group of children parading between giant sunflowers and whimsical garden creatures.

The Garden of the Dogs is slated to go up this fall at Elite Performance & Wellness, located at 190 N. Brookwood. This mural design includes an intricate garden of flowers (many connected to the local area) with hidden bulldog images as a nod to nearby Hamilton High School. Garden of Dogs was created by Christian Dallas, a contemporary painter and muralist who works in the greater Cincinnati area.

Find a map of all the Hamilton murals here.

More information about the murals in Hamilton / Street Spark can be found at The Fitton Center’s site. 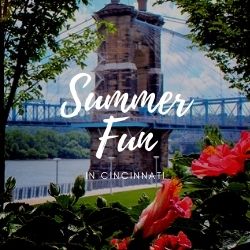 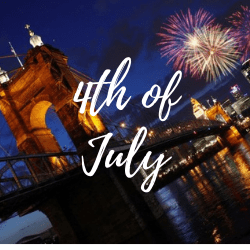